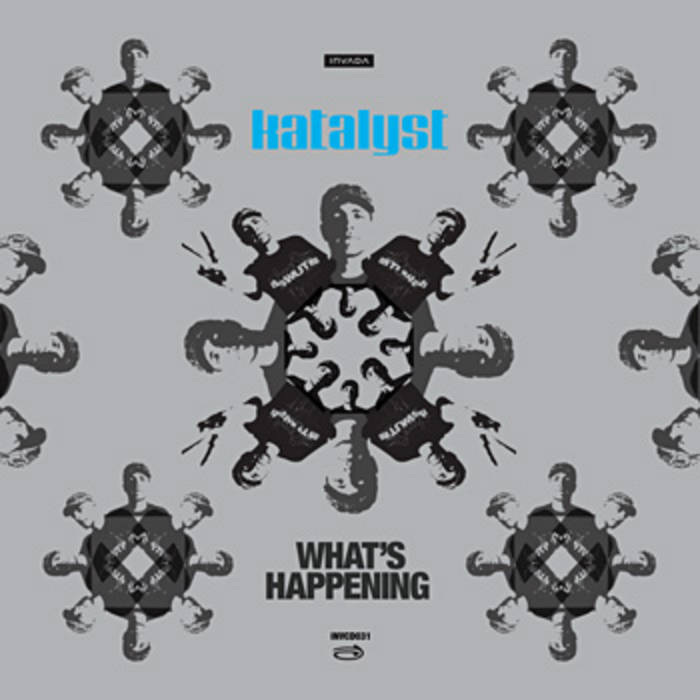 The long awaited second album from Sydney-based, internationally renowned producer Katalyst is finally here. Entitled "What's Happening" - this is the follow up to his critically acclaimed, "Manipulating Agent" released in 2002. Nominated for an Aria Award, "Manipulating Agent" won Best Album and Best Producer at the 2002 Dance Music Awards. It was album of the week on JJJ and featured hits like "Fusion" and "Showtime" that stayed on high rotation across the country for years after release. Many tracks from the album went on to appear on commercials, tv shows and numerous compilations. Including the internationally renowned Cafe Del Mar series, Dope On Plastic and many more.

Its been 5 years between releases, during this time Katalyst has been highly productive in terms of musical output both here and overseas, as well as running his successful independent label Invada Records. Katalyst has been responsible for production on a number of albums - working with Ru C.L in Australia and Bristol UK, Stephanie McKay in New York, and remixing for the likes of Ugly Duckling, The Beautiful Girls and Motown Remixed to name a few. Also releasing the highly successful mix CD "Dusted". Throughout time, the artist's role has been to make social comment and to put forward views that are not always in line with the views imposed on us by "the powers that be". This album makes comment on many issues facing us today. The title of the new album,"What's Happening" can be interpreted in several ways - be it what's happening socially, politically, environmentally, economically or personally. The other take on the title being - what's happening musically.

The album is a musical excursion through many different styles that are all brought together with Katalyst's signature sound. Moving seamlessly though space-aged soul, hip hop, funk and rock, this project is truly diverse. Katalyst collaborates with many talented and like minded artists to help make comment on what's happening today. The wide array of guests include:

Stephanie McKay (US) New York based soul artist who has worked with the likes of Mos Def, Talib Kweli. Amp Fiddler, Geoff Barrow and many others. She recorded two albums with Brooklyn Funk Essentials in the 90?s and is also a member of the new off-shoot Parliament Funkadelic band called Drugs.
Steve Spacek (UK/LA/Aus) soul artist whose been likened to Marvin Gaye and has worked with J Dilla, Slum Village and more. Giles Peterson from BBC1 has called him the voice of modern soul.
Ru C.L an Australian Jamaican MC hailing from Melbourne
Hau from the Aria award winning hip hop duo Koolism
Yungun (UK) who is one of the UK's finest MC's with supporters like BBC Radio One's Zane Lowe and Steve Lamacq (BBC1 Xtra)
Mat McHugh who is the lead vocalist from The Beautiful Girls
Joe Volk (UK) a talented singer/ songwriter from Bristol, front man in Gonga and Crippled Black Phoenix
Diverse (US) Chicago based MC who has worked with artists such as Mos Def, Madlib, J Dilla, RJD2 and Perfuse73. His last album was Feature Album on Triple J.
Katie Noonan - former front woman from George, about to release her new solo project.
J-Live (US) a New York based MC who has worked with artists such as DJ Premiere, Pete Rock, DJ Spinna, Prince Paul, DJ Jazzy Jeff, Numark, Dan the Automator, Mos Def, Talib Kweli, Chali Tuna and more.
Adalita - iconic front woman from Magic Dirt. She needs no introduction
Supernatural (US) ? New York MC - arguably the worlds best freestyle MC. (*bonus track on vinyl only)

The first single, "All You've Got" is currently enjoying heavy rotation nationally as well as receiving rave reviews from overseas. The video clip features some of Australia's top skaters and has been on rotation on many video channels including Channel V, MTV and in the top 20 on J-TV for the last 4 weeks.

The second single "Say What You Feel" features New York soul artist Stephanie McKay. This is not their first collaboration, Katalyst and McKay have worked together in the past collaborating on "Rising Tide" on her first album entitled "MCKAY" which was released by Polydor/Universal in 2003 to international critical acclaim. Katalyst was also enlisted to write several tunes on her new album in the US and will be producing the entire album for her Australian release on Invada scheduled for next year. The film clip for "Say What You Feel" features some amazing protest footage from the 60?s, 70?s and current day. The clip embodies what the tune is about - people having the courage to express their views and not be dictated to by "the powers that be".

So in this age of information it seem lots of important things going down are ignored by an increasing number of people. This albums all about "What's Happening". Real music for real people.

"Katalyst is one of my favorite Australian producers, his stuff is always on point. The new album is a monster" DJ Z-Trip